Edit
watch 12:03
Witcher Lore: The Witch Hunters
Do you like this video?
Play Sound

Cleansing the North of mages and Elder Races

Witch Hunters were harsh, cruel, and fanatical members of an inquisitorial synod dedicated to the persecution and eradication of magic in Novigrad, Oxenfurt, and Velen during the witch hunts in 1272. Equipped with swords, crossbows, dimeritium bombs, and shackles they were well prepared to fight both amateur and professional mages. They became even more formidable when the Order of the Flaming Rose was disbanded by Radovid V, resulting in some of the knights joining the witch hunters.[1]

Though officially without any allegiance, their operations were sanctioned by the Church of the Eternal Fire[2] and monarchs occasionally supported them with gold and firewood for the pyres. They were known as being intimidating as well as overzealous in their cause.

During this time, absolute loyalty and humility were required of sorcerers but some of them were accustomed to a different kind of treatment, thus this did not sit well with most of them.[3] This, combined with one of Ithlinne's prophecies being wrongly interpreted, contributed to many deaths at the stakes and by torture, including several members of the Lodge of Sorceresses.[4]

Concept art from The Witcher 3 Artbook 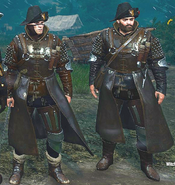 Two of them in Oxenfurt