Wolves are an aggressive and carnivorous species of wild animal, related to the domesticated dogs found in human settlements.

Susceptible to knockdown attempts; the Fast Style is most effective against wolves; experienced witchers use the Group Style to fight multiple wolves. Susceptible to steel

Wolves attack in groups, using their numerical superiority to their advantage

Wolf pelt
Wolves are the ancestors of dogs, hunting these wild animals is generally the job of the king's foresters, but occasionally a witcher while travelling through the wilds may find himself up against a pack of these animals. Just like any beast, he must deal with them swiftly and carefully.

There was so much snow that winter that we had to dig tunnels just to get to the privy and had icicles in our pants by the time we got back. Wolves came out of the forest, ate the cattle and then surrounded the house. They were howling madly. Surrounded by that pack of wolves, we felt like three little pigs.

Wolves attack in groups, using their numerical superiority to their advantage

Raw meat
Wolf hide
Wolf's liver
Dog tallow
Wolves can be found throughout the mainland and on the Skellige Isles. They also appear during contracts or in quests, serving as the allies of leshens and werewolves. Several Skelligers also keep tamed wolves as pets, alongside more conventional dogs.

Friend of mine used to say that with all these griffins and basilisks and whatnot, good old fashioned wolves weren't nothing to worry about... Then the damned beasts devoured half his flock.
– Yngvar, shepherd
Once upon a time wolves were the absolute rulers of the forest. Men used them to frighten children, while adults, too, trembled at the sound of their howling. Post-Conjunction monsters not only pushed wolves into the deepest wilds but also took over their place in human nightmares. Yet this does not mean the old predators ceased to be a danger. Wolves do not have a drop of magic within them, breathe no fire and spit no acid, but that in no way stops them from killing unwary travelers and hunters.
Particularly dangerous are wargs, a nasty and ferocious subspecies of wolf, and the snow-white wolves which today can only be found in the wild highlands of the Skellige archipelago.
Wolves usually feed in packs counting from a handful to over a dozen members, though some particularly strong males hunt alone. Though wolves are weaker than many post-Conjunction monsters, they make up for any lack of strength with their intelligence. When fighting them one must be especially careful not to become surrounded. The presence of wolves can also signal more serious trouble – these predators often share their hunting grounds with werewolves and leshens.

Wolves hunt in packs and coordinate with one another in order to surround their choice of prey. Beyond this group coordination, wolves are similar to dogs in the manner in which they attack, where occasionally the leader will be a warg as opposed.

There are multiple schools of thought about engaging a pack of wolves. On one hand, you can parry all of their attacks as long as you hold down the parry button, and can counterattack with the proper timing. On the other, they'll happily attack so frequently and from so many directions that you won't have time to counterattack. Creating openings to halt their momentum is the key to efficiently defeating them, and your Signs are the best tools to make that happen. Which sign is the most effective is up for debate.

You can choose Yrden to slow down attacking wolves, which makes counterattacks easier to time and dodging and punishing more likely to succeed before being interrupted. The downside to this strategy is that it requires you to hold your ground, as getting forced out of your protective circle renders the sign useless. This can be done by simply parrying their attacks, but the more time you spend defending, the less time you'll spend attacking and making use of the slowdown.

If one finds themselves surrounded, you can use Igni and Aard to try and drive the pack off, even if just for a moment, which allows the you to recover some of your stamina and/or regain control over the fight. Wolves tend to have low resistance, which means they'll often catch fire or be knocked all the way to the ground by your Signs. With a few of the wolves momentarily disabled, you'll be able to either target their few remaining buddies, or strike a devastating blow to a downed wolf that can't defend itself. The downside to this tactic is that if enough wolves happen to resist burning or knockdown, or you fail to strike enough of them at once, you'll find yourself still overwhelmed by attacks and now unable to cast a Sign.

Leshens are able to command entire packs of wolves to aid them in battle. The wolves that are summoned by a leshen must be fought with silver swords. The wolves will be struck and killed by the leshen's own attacks, so if you see the leshen preparing to use the tree roots against you, try to roll in a direction that kites the wolves to the attack. 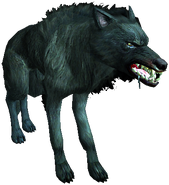 The Witcher: House of Glass

Promo screenshot of Geralt against some wolves