Edit
watch 02:34
Fire Emblem Warriors: Three Hopes - The Loop
Do you like this video?
Play Sound
In a grossly small cage, curled up in a ball, lay a lizard covered in dark, peculiarly adorned scales. When the beaked one struck the cage with his rod, the reptile thrashed about, running its scales across the bars. It stretched its long neck and emitted a piercing hiss, demonstrating sharp, white, conical teeth that contrasted starkly with the nearly black scales around its maw.
pg.75 Time of Contempt (U.K. Edition)

Wyverns (Elder Speech: Vyverne) are an endangered species of ornithosaur with snake-like necks and long tails that end in a venomous trident, adorned almost fully in dark scales. Their menacing teeth allow the creature to swoop down from the sky, easily snatch their prey and carry it off to their nest, not caring if it is a sheep or a man.[1]

Wyverns live in the wilderness or near human settlements; they are a natural element of an ecosystem; they are prized by druids, who tame them

Resistant to stun and poison attempts

Sensitive to silver and Ornithosaur Oil

They dive at their opponents, try to knock them down and poison them with venom

Wyvern meat
In the game, wyverns do not appear until Chapter II, where they are initially restricted to Wyvern Island in the northern part of the swamp.

"Wyverns are unlucky to be frequently mistaken for dragons. Seeing a reptile approaching a flock of sheep, peasants panic. They expect it to breathe fire, massacre everyone and abduct the local virgins. While it is true that wyverns hunt sheep, they neither breathe fire nor lay waste to whole villages. And they are completely indifferent to virgins."

Developer CD PROJEKT RED's characterization of the wyvern taken from the Monsterbook which was enclosed with the Collector's Edition of the computer game "The Witcher"​ for Poland, Hungary and the Czech Republic:
Ordinary folk often mistake wyverns for dragons. Witchers, however, immediately recognize these flying lizards, which tread upon the ground on two heavily-muscled legs. They also know that when fighting this beast, they must avoid the venomous stinger at the end of its tail and its jaws that bristle with deadly teeth.
The concept for the wyvern emerged from the human fear of reptiles. With its flat head and long neck, the creature resembles a snake; its extended tail only strengthens this impression. The dinosaur-like hump on its back makes it all the more terrifying. The bright colors of the sketch immediately suggest a venomous creature. Thin, long spikes seem to protrude directly from its curved spine, and along with the beast's general posture serve to emphasize its malicious and treacherous nature.
If you are not a witcher, you had better not mess with the wyvern.
On one of his quests, Geralt has a chance to fight alongside a group of these beasts. It is a pleasure to witness the destruction they spread amongst foes unfamiliar with the ways of fighting these fearsome creatures.

Wyverns have been spotted nesting in northeastern Velen, though it must be stressed that these beasts are highly-adaptable, and have been sighted across the entire Continent and the Skellige isles.

Dragon scales
Monster blood
Monster bone
Monster brain
Monster claw
Monster eye
Wyvern egg
Wyvern hide
Wyvern mutagen
Wyvern trophy
Typically a wyvern will attack from the air, attempting to knock its prey down using its wings. After it lands it will attack with its tooth-filled beak in an attempt to draw attention away from its most deadly weapon, the stinger that can be found at the end of its long tail.

A single strike from this carries risk of poisoning from powerful toxins. Even a Witcher will experience wrenching pain when injected with the venom, so preparing ahead of time with Golden Oriole is suggested.[2]

Most dangerous of all are the royal wyverns. Or, as they're called in some circles, the royal pains in the arse.
– Albina Tottelkampf, lecturer in natural sciences at Aretuza
Wyverns are often mistaken for dragons, and, though they are much smaller than their more famous kin and do not breathe fire, they are likewise extremely dangerous monsters. Especially feared are the so-called royal wyverns who, like their namesake monarchs, are exceptionally ornery and extremely deadly.

Wyverns are quite venomous, they are able to spit their venom from a distance and even inject it directly into its victim through the stinger on the end of its long tail, the use of Golden Oriole can prevent it from incapacitating you. They will fly around their prey, well beyond Crossbow range, before they will swoop down at break neck speeds in an attempt to claw at their victim.

Aard and Grapeshot can bring a wyvern to the ground, though they are tough enough to be resistant to Crossbow bolts, but other more lethal munitions can force it to the ground.

Once on the ground a wyvern will prefer to strike with the talons on its feet, its teeth and its tail. It is possible to parry the bites, but if unsuccessful the consequences can be deadly. The don't appear to be very good at dodging while on the ground; an unending series of Fast attacks has been seen to keep them off balance so they don't attack right to the point that they die. 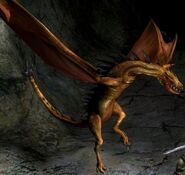