Witcher Wiki
Register
Don't have an account?
Sign In
Advertisement
in: Elves, The Witcher characters, The Witcher Chapter II,
and 5 more
English

Edit
watch 06:57
What happened to Yaevinn in The Witcher Series Witcher lore - Witcher 3 Lore
Do you like this video?
Play Sound

Time of Contempt
The Lady of the Lake

The Witcher
The Witcher 2: Assassins of Kings (mentioned)

Yaevinn was an elf and a member of Toruviel's Scoia'tael commando,[1] later leading his own regiment in the vicinity of Vizima. He had a greater penchant for flowery words and metaphors than most elves, perhaps rivaling Dandelion alone in his prose.

In June 1267, while on reconnaissance in the Pontar Valley with Yaevinn and Toruviel, Cairbre aep Diared noticed a lone rider on route from Tretogor to Vengerberg. Toruviel kicked Yaevinn awake and two had a discussion about the morals of killing the lone human, though as the messenger reached 150 paces away, Yaevinn loosened an arrow, which struck him through the chest, falling off his horse onto hot sands. The elf wasn't aware sparing his life would have prevented the provocation at Glevitzingen and the subsequent war.[1]

Yaevinn participated in the Second Northern War with Nilfgaard. During the Battle of Brenna, where he was part of the Vrihedd Brigade, he and his commando entered in the medic tent of Rusty and started to kill all the patients but they immediately stopped when they saw that the medic and his assistants were healing wounded people from both the factions, making no difference between Nilfgaardians and Nordlings.

He was later seriously injured in that battle but in the end he survived his wounds.

Yaevinn appears in Chapter II of the game. He treats Geralt with hesitant respect and appeals to him to aid his faction; he reminds him that as a mutant, he would never be accepted in human society, only tolerated and could better relate to the cause of the Scoia'tael. He is eloquent and often speaks in verse, employing metaphors and literary allusions to convey his meaning.

If the witcher chooses to ally himself with the Scoia'tael, Yaevinn plays an even more central role in the story. It is also Toruviel who is a member of Yaevinn's group rather than the other way around, although he does not seem to outrank her by much.

Yaevinn the elf is as conceited as he is eloquent. He seems cunning and wise; moreover, he despises humans, considering them aggressive barbarians, and has respect only for the Elder Races. Still, this disillusioned elf treats me with respect in his own, peculiar way. Everything suggests that Yaevinn is preparing for battle — in the swamp he has created a training camp for the Scoia'tael under his command.

The Scoia'tael led by Yaevinn defeated the Order of the Flaming Rose during the clash in the Golem Burial Ground.
Yaevinn is interested in artifacts of historical value for the nonhumans — he's looking for something which could serve as a banner for his Scoia'tael. Yaevinn remains a cynic and a pragmatist even when thinking about the heritage of the Elder Blood.
During the bank robbery in the Trade Quarter I decided to support the Scoia'tael. Yaevinn believes that the stolen money will finance an uprising.
I asked Yaevinn for military support during the assault on Salamandra's headquarters in Vizima. The elf, who was among those invited to Leuvaarden's reception, agreed to help me dismantle the organization.
On the hill under the Old Manor my friend aided me again. We stood shoulder to shoulder against Salamandra.

Yaevinn accused me of causing Toruviel's death. A fight broke out and he died by my hand.

Yaevinn accused me of causing Toruviel's death. I didn't let him provoke me and he went his own way.

On Iorveth's path during Chapter II, the Scoia'tael leader will discuss Yaevinn's legacy with Geralt in Vergen if the latter sided with the Scoia'tael or remained neutral in The Witcher.

Yaevinn, same as Iorveth, does not appear in game and apart from the second one, he is not even mentioned by other characters, but he has his own gwent card as part of Scoia'tael Gwent deck. 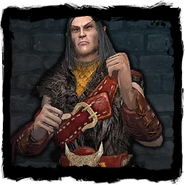