watch 15:05
'The Witcher' Character Lore: Who Is Yarpen Zigrin, The Dwarf Adventurer?
Do you like this video?

"Do you really wish to know?"
Spoilers from the books and/or adaptations to follow!
Sub-Pages:

Sword of Destiny
Blood of Elves
Time of Contempt
The Tower of the Swallow
The Lady of the Lake
Something Ends, Something Begins

Yarpen Zigrin was a well known dwarven warrior, adventurer, and a dragon-hunter. He was the leader of a group of six dwarves and later a veteran of the Battle of Brenna.

Not much is known about Yarpen's youth. It is known however, that he became a leader of his dwarven company which included Lucas Corto, Paulie Dahlberg, Regan Dahlberg, Xavier Moran, and Yannick Brass. This group traveled the Continent and hunted large and dangerous game.

During that time, Yarpen and his company had apparently slain a dragon called Ocvist. Soon afterwards they traveled to Caingorn, where another dragon had been sighted and a hunt called. When they arrived in the kingdom, they joined the hunting party.

Hunt for a dragon

Yarpen's group was just one of many parties participating in the hunt. Officially, the hunt was under the command of King Niedamir, but he did not really command anything. Other individuals joining the hunt were Knight Eyck of Denesle, Boholt and his Crinfrid Reavers, sorceress Yennefer of Vengerberg, witcher Geralt of Rivia, bard Dandelion, sorcerer Dorregaray, and last but not least, Knight Borch Three Jackdaws with his company of two Zerrikanian women (Téa and Véa). The target of the hunt was a large, female Green dragon that made a nest in the area. Shortly before the hunt commenced, the dragon was poisoned by some locals, and though seriously wounded, she survived.

Thus the hunt begun. Very soon, Yarpen made a deal with Boholt about the dragon, the killing and mainly the share of the dragon's treasure. During the hunt, they encountered many perils such as a rock slide that almost killed the sorceress and the witcher but the two were saved by Eyck. They eventually reached their goal and stood face to face with the wounded dragon, but before they could attack another dragon appeared, this time a Golden dragon. Villentretenmerth, the dragon, used his telepathy and told the party he would fight them in a fair duel. Eyck of Denesle did not hesitate and swiftly attackeded but the dragon quickly defeated his foe and sent him, along with his horse, flying across the valley.

After this, the King Niedamir decided to leave. However, the Reavers and Yarpen's group agreed they would still finish the hunt and kill the golden dragon. The hunting party argued, for Geralt, Dandelion, and Dorregaray did not want to kill such a beast and were against it. Boholt and Yarpen, along with their men, quickly defeated and bound all those who opposed them. The sorceress Yennefer, who at first appeared to side with the hunters, tried to use some spells against the hunters but was knocked off by Yarpen and tied up as well. With all the opposition tied up, Yarpen's and Boholt's men attacked the dragon.

Though the golden dragon defeated them as well, the local militia arrived during the fight and attacked. The combined forces of all the men proved too much for the dragon and he began to lose. Fortunately, Yennefer, Geralt, Dandelion, and Dorregaray managed to free themselves and tried to defend the golden dragon. Likewise, Téa and Véa appeared and started to kill one man after another. Eventually, the defenders repelled the attackers and Villentretenmerth emerged victorious. He however forbade any more killing and thus the Reavers and Yarpen's group survived. It was then shown that the "treasure" the dragons were protecting so much was, in fact, a little hatchling. When the golden dragon, who was actually Knight Borch Three Jackdaws, left with his youngling, the entire hunting party dispersed and went their separate ways.[1]

Around 1265, Yarpen and his company were still active, though they were one man short because Lucas Corto retired in Mahakam and married. They served King Henselt of Kaedwen and were tasked to deliver a convoy of secret cargo. On their way, they met a trio of travelers: the witcher Geralt of Rivia, sorceress Triss Merigold, and a young girl named Ciri. Geralt recognized his old mate and they asked to join them for a time being. The sorceress was very sick and was unable to take care of herself and so the witcher helped look after her. Yarpen noted how Geralt took care of the sorceress in a very kind manner and told Ciri never to make the same mistake as Triss, and confuse care and compassion with 'something else'.

Despite helping King Henselt, the king didn't trust Yarpen and his dwarven company, believing all non-humans conspired with the Scoia'tael, and so the king had one of his soldiers tip off the Scoia'tael about the convoy so they'd attack the group to test the dwarf's loyalty. The company proved their loyalty as they attacked back, though a few of Yarpen's men died in the fight. Afterwards, on hearing that his men died because of his employer, Yarpen became enraged. At this time, Geralt's party left Yarpen's company, heading to Ellander and the dwarves continued on their own.[2]

Later, when the Second Northern War begun, Yarpen fought against the invading Nilfgaardian forces. He proved to be a very skilled warrior and fought one battle after another, eventually standing in the last battle of the war, the Battle of Brenna. He survived the war and was present during the parade in Novigrad. However, his men most likely died during this battle since they were not present during any of Yarpen's adventures afterwards.[3]

When Saskia the Dragonslayer began to rally folks under her banner with promise of independent realm where all will be considered equal, Yarpen joined and moved with her to the city of Vergen in Upper Aedirn. There he worked with other dwarven mates such as Skalen Burdon and Sheldon Skaggs. At first, all was relatively fine but then King Demavend III of Aedirn was assassinated. Even though he left an heir, his son Prince Stennis, King Henselt used the opportunity and invaded the Pontar Valley with the intention to annex it. Thus Stennis and his noblemen joined their forces with Saskia and moved to Vergen and Yarpen became a member of the War council.

Saskia and the prince were later invited to negotiations with the king. Yarpen did not accompanied them and instead stood on guard near the city.

If Geralt took Iorveth's path: There he met again the witcher Geralt, now accompanied by Iorveth and another dwarven friend of his, Zoltan Chivay. Yarpen was happy to see them but quickly noticed that Geralt acted like he had no idea who the dwarf was. Zoltan explained that Geralt suffered from amnesia and didn't remember a thing before he awaken near Kaer Morhen.

Their conversation was cut short as they saw a powerful surge of energy emanating from the place of negotiations. Geralt and Iorveth quickly hurried there and discovered that King Henselt had murdered a monk named Olcan and released a dormant curse. The duo had to help Saskia and the prince get through the cursed mist full of wraiths. With help from a magical owl, they eventually managed to arrive safely in Vergen. There, a War council was summoned to deal with the news of the curse and Iorveth's arrival and eventually an agreement was reached and Saskia stood for a ceremonial toast. However, she fell to the ground once she drank from the chalice - clearly poisoned. Sorceress Philippa Eilhart, Saskia's advisor and the magical owl, discovered that she was indeed poisoned by Thaumador and now her life hanged by a thread.

Philippa prepared a list of items and ingredients that would help her make a cure for the Dragonslayer. Meanwhile, Yarpen and his mates went to the local pub named The Cauldron and shared all news and happenings. They were soon joined by the witcher, who took it upon himself to find all the items Philippa needed. He also engaged in a friendly chat and even fought Yarpen in Arm wrestling but the situation was not easy so, after a while, they started to plan their next move. One of the items the sorceress needed was a special herb known as immortelle that grew deep below the surface. Local mines were an ideal place to look for it, but they were unfortunately closed because various filth infested them and made them incredibly dangerous. Yarpen, Sheldon, and Zoltan decided that they will accompany the witcher, provided he got access to the mines, so Geralt persuaded a local alderman Cecil Burdon to give them access. The group entered the mines and confirmed that the mines were indeed infested by necrophages. They killed every single one that they discovered, including their nests, as they moved deeper and deeper into the mine. After some time, they found the place where the herb was growing but the place was also the territory of a very dangerous and powerful monster, Bullvore. The group fought the beast and eventually killed it, allowing them to finally pick the herb. With it in hand, they returned to the surface and Geralt continued on while the dwarves retreated to the inn and continued their conversations.

Yarpen and his men were a vital part of the defending forces and thanks to soldiers like them, Vergen emerged victorious, Kaedweni forces were decimated, and King Henselt was captured. After the battle, Saskia and Philippa left for Loc Muinne where a great summit was to be held while Yarpen stayed in the city.

If Geralt took Roche's path: Geralt, accompanied by Vernon Roche, commander of Blue Stripes, joined the forces of King Henselt. Thus the witcher met Yarpen only during his quest to find the items needed to lift the curse. Yarpen, with Skalen Burdon, were guarding the Mahakam gate.[4]

After the events at Loc Muinne, Saskia returned to Vergen and revealed that she was a dragon and, as expected, Vergen's residents had mixed feelings about it. Many abandoned the city and while others watched her actions closely.

Not fully recovered from Philippa's spell, Saskia (while in dragon form) unintentionally killed a group of dwarves during the first expedition against the Chelonodrake. Come morning she returned, in human form, to Vergen and swore before all the inhabitants that she'd never again transform into a dragon or else she'd leave the area.

Three weeks later, Saskia and Yarpen Zigrin talked to Geralt about the Chelonodrake and convinced him to help them slay the monster. Five days later she, Geralt, Eggar, Maevarienn, and Yarpen created a plan to kill the monster.

Two days later the group, accompanied by Barclay Els, went on the final expedition against the Chelonodrake. After defeating the monster, in which Barclay was heavily wounded, Saskia broke her promise and transformed into a dragon to get hiim to the dwarven medics fast. Unfortunately it was already too late and she decided to leave Vergen for breaking her oath.[5]

Not long after the hunt, the Nilfgaardian Empire attacked again, starting the Third Northern War. They quickly conquered all the lands up to the river Pontar. Fortunately, Yarpen managed to survive and during the rest of the war was alive and well - as mentioned by Geralt in Novigrad.[6] 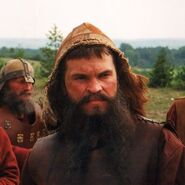 Yarpen in The Witcher: Matters of Conscience
Add a photo to this gallery

Retrieved from "https://witcher.fandom.com/wiki/Yarpen_Zigrin?oldid=492162"
Community content is available under CC-BY-SA unless otherwise noted.